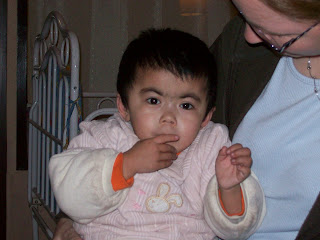 This morning Marsha woke up at 5 and could not get back to sleep, so she read 3 books & James & I&II Peter, while everyone else was lazy:) Gary and the girls woke up at 10:15. We then got ready and cleaned up the room and ate PopTarts. We were supposed to meet our guide at 3:30, so we went to go eat lunch at 2:40 and she was already here. We weren't sure what to do, so Gary went back to the room to grab us all granola bars and waters. We went to the civil affairs office to WAIT.

There are fewer regulations here, so cars and bikes drive whenever they want through many of the intersections and even in the wrong lane. There are also no seat belts. We did not have to go through security or anything to get in a government building. Those kinds of things are apparently not a concern here.

At the office, we were expecting Maria to arrive at 4, so we were waiting and looking out the window in anticipation. We finally received word that the orphanage director would be late. We sat down and then continued to look at the plain white door anytime we heard a noise in the hallway. Finally at 4:45 the noise was Maria with the fostercare director and the orphanage director. We weren't sure what we were supposed to do until she handed Maria off to Marsha. We all stood around while she played with Marsha's earrings and got them out! We finally realized that nobody was coming to talk to us, so we sat on the couch to try and play with Maria----poor Gary had the video camera. When he could take the waiting no longer he put it down to join us:)

After getting Maria at the office, we had to walk next door to get pictures. They needed a picture of Gary & Marsha & Maria, but Maria was too interested in pulling our clothes and looking at the lights and the floor. They were clapping their hands and making noises, of which she could hear none of it:) After our group picture, she had to sit on the stool by herself. She then found the stool more exciting than looking at the camera. Whenever the camera came down, she looked up and then when they went to take a picture she looked away. It took awhile, but it was certainly funny:)

After pictures we walked to the store. It was more like a mall. Shopping is confusing here. You pay for things in whatever department you are in, so we had to think about what and where we needed to go in order to purchase things. They have escalators with no stairs, so that the carts can ride up and down them. Kirstie & Maria really enjoy these!

By the time we finished shopping it was 6:30 and then we headed to the van for the hotel. It's strange not putting a child in a seatbelt, but it was fun to hold her in my lap:) At the hotel at 7, we signed a ton of papers, all in Chinese, so no idea what they said. Then we went to our room. By then we were starving:)

Maria stands, but doesn't seem to walk. She also doesn't crawl very far before she falls to the floor. She mainly likes to be held. We made her a bottle of formula. Formula goes up to age 3 here. We thought we would try to get her to eat food. We have soft vanilla wafer type cookies, which she loved to suck on and then spit out. We tried Cheerios which she constantly reached for and sucked on and then spit out. She must not understand chewing and swallowing. Her reports say that she has eaten rice, eggs, & noodles. We'll try that tomorrow for breakfast. For lack of anywhere else to eat because there are no room menus, Gary walked to McDonald's for more chicken nuggets and ice cream sundaes. Maria did like ice cream after she got over the shock of the cold temperature.

The only time Maria cried was for her bath. She did not like that at all. We're wondering if they just sponge bath them here. She is still dirty, but much cleaner than before. She has some kind of rash or bug bites, so we put lotion on her, which she seemed to like. She easily layed down in her crib and fell asleep at 9pm. We were all tired and followed her to bed not much later.

What a blessing it was today. Thank you for your prayers. Maria came to us without screaming, so we are so grateful. Maybe because she cannot hear the noise, she does not seem overwhelmed with the city. We officially become a family of 5 tomorrow. Please pray that the paperwork goes smoothly and we answer all the questions appropriately. Our three girls are certainly a blessing from the Lord. We are so thankful!

Enjoy some pictures from our day!